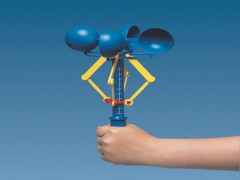 We completed the Will Wind Work Pod activity. I had read about other schools having wind turbines, and it was also being mentioned in the local news as a possibility for the Isle of Man to have wind turbines. As it was a topical issue on the island, I thought it would be a good project to do. The aim was for the youngsters to learn about wind as an alternative power source and see if the school grounds were a good site for a wind turbine.

Action
The project was undertaken in enrichment week, for year 7 pupils to voluntarily participate in. I arranged for our local weather forecaster (operational meteorologist) to run a session, and sent him the information from the Pod website on Will Wind Work. He spent a day with the students and brought equipment from Ronaldsway met office, including hand held anemometers, a weather balloon and a fishing rod with balloons. The students did various experiments around the grounds.

The students also had the chance to design windmills drawn from the 3-legs of Mann (Manx Flag). The windmills were planted in a flower bed to make a feature. The students were given a chance to research wind turbines and provided with questions to answer, e.g. about costs etc.

Pupil leadership
Pupils were able to take it in turns to use an anemometer to record wind speed at various locations on the school grounds. They got to see a weather balloon and record its movement. They also took turns with the fishing rod at various locations – helium balloons were attached to the line so pupils could measure wind
turbulence.

All of the students had access to computers to do research and write their own blogs.

Resources
I used the Pods resources and lesson plan for guidance.

The students liked putting up their own blogs, and we also put photos in the gallery.

Mr Young, the meteorologist, helped to run the project with resources from the Ronaldsway Met office.

Staff supported the project by making templates for the children to make windmills. Canes for the windmills were donated by the gardening club, while paint, crayons and scissors were provided by the Art Department.

Local community
The Department of Infrastructure supported by paying the meteorologist to work with us and providing the equipment.

Result
36 children were involved in the project and have learned about wind turbines.

The students found the best place to build a wind turbine was in the middle of the cricket pitch. They learned how to measure wind speed, as well as the importance of other factors such as turbulence, in placing a turbine. The figures recorded were wind speeds at various locations around the school.

They were able to improve on their personal, learning and thinking skills. Problem solving skills were used to find the best locations, while independent enquiry skills were employed by doing their own research on wind turbines. Creative thinking was required to design the windmills for the garden display.

The students seemed to enjoy project and are more aware of alternative energy.

Lessons learned
If you can get help from a meteorologist and the equipment to do hands-on project work, it will be a memorable activity for young people.The children felt they were undertaking meaningful experiments.

Next steps
We are about to start the Bug Hotel activity.